Sidney the Silly Who Only Eats 6
By M.W. Penn 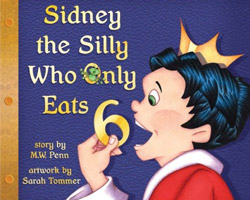 The concept of number grows out of ideas about relationships between quantities. This book on number and comparison is about six year old King Sidney, who will eat only 6 of everything, though the palace chef, Brolly from Brixes, tempts him with delicious 4s, 1s and even 600s. When the beleaguered chef finally quits, Sidney learns to divide his food into portions – and also to compromise.

“Penn’s creative use of rhyme and number is a model of how to help the young child begin the demanding tasks of mastering literacy and numeracy.” – Dr. Edward Zigler, founder of the Zigler Institute of Child Development at Yale University and the ‘father’ of the Head Start program
↑