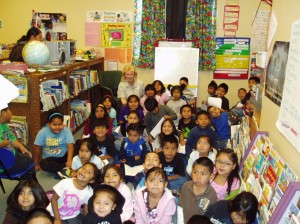 MW Penn with the children of Blackwater Community School, Arizona

MW Penn’s first children’s book, Sidney the Silly Who Only Eats 6, won the Connecticut Press Club Communication Award for best children’s book of 2007. Since then she has published several more children’s books combining math with literature, a teacher’s guide to introducing math concepts through stories, and a math dictionary for grades K through 8 which has been recognized for its accurate and unique graphics. Click on the menu above to find out more about her books. MW Penn has published poems in several anthologies including the International Rotary Club literacy initiative, A World of Stories, and Caduceus from the Yale Press. Highlights for Children has also published her poetry – click on the menu to read some!

As an active member of the National Council of Teachers of Mathematics, Penn has reviewed books and articles for NCTM publications and presents sessions on combining children’s literature with mathematics and on modeling operations with fractions at national, regional and statewide NCTM conferences. She spoke at the NCTM national conventions in Indianapolis (2011), Philadelphia (2012), Denver (2013), New Orleans (2014), Boston (2015), San Antonio (2016) and Washington D.C. (2018) and has presented sessions at all three regional NCTM conferences – mid-Atlantic, mid-western and western.

In addition, Penn has appeared at the Associated Teachers of Mathematics in Connecticut (ATOMIC) conference every year since 2007, at New England, Florida, New York and Pennsylvania NCTM affiliate conferences, and at the Ten County Mathematics Conference in New York, returning to these conferences whenever her schedule permits.

Highlighting the interdisciplinary aspect of her work, she presented a session and chaired a panel on interdisciplinary study at the national conference of the National Council of Teachers of English and she often hosts an author’s table at the NCTE Books for Children luncheon.

Dr. Edward Zigler, late of the Zigler Institute for Child Development at Yale University and the ‘father’ of the Head Start program, said of her first book, “Penn’s creative use of rhyme and numbers is a model of how to help the young child begin the demanding tasks of mastering literacy and numeracy.” Dr. Maria Diamantis, past President of National Council of Teachers of Mathematics New England, wrote of her work, “The integration of poetry and mathematics is awesome, captivating, and invites children to explore problem solving and number sense!” Duncan Robinson, CBE, Master of Magdalene College, Cambridge University, wrote of ADDverse: “Penn is a Pied Piper; no child is able to resist the music of her numbers.”

Before writing books for children, Penn designed software systems for AT&T, the University of Florida and the FDA. Software documentation and manuals led to a career in technical writing; subsequently, Penn published over 50 magazine articles in the field of architectural stone.

MW Penn visits classrooms and libraries to read her work and introduce children to the different, though related worlds of mathematics and poetry. Click here to read an article about her visit to the Lehighton, PA school district.