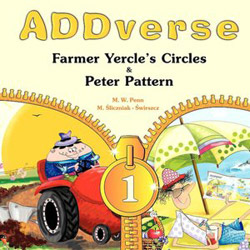 Gumboot Books, 2009
There are two poems and two themes in ADDverse: Farmer Yercle’s Circles on the geometry of a circle and circle based solids; and Peter Pattern on pattern, the precursor to iterative functions.

CCSS Standards
K.G.1. Describe objects in the environment using names of shapes, and describe the relative positions of these objects using terms such as above, below, beside, in front of, behind, and next to.

K.G.2. Correctly name shapes regardless of their orientations or overall size.

Teacher Notes
In plane geometry, a circle is a set of all points equidistant from a given point, which is its center. The distance from the center to any point on the circle is the radius of the circle.
In three dimensions: When two circles of the same radius lying in parallel planes are connected by the curved surface formed by the straight lines joining corresponding points on the circles, the enclosed volume is a cylinder. A sphere is the set of all points equidistant from a given point, which is its center. (The definition of a sphere does not restrict the points to a plane, so a sphere is 3 dimensional.)
All three are referenced in Farmer Yercle’s Circles and, after reading the story, you should find each in the text and discuss them:
Circles abound: ‘Hooper-Hooper Hop-along races round a circular race track’ is but one example; Hooper, himself, is quite round of body. The main point is that a shape is either a circle – adhering to the definition – or it is not. You can call any other shape more nearly circular. Ovals are rounded but are not circles.
Cylinders are found in pictures and in the text: Farmer Yercle uses rollers to set his animals’ curly hair; rollers are cylinders. The chicken coops are made of ‘round shaped pegs’, which are cylinders.
The cattle barn is a sphere. So are the balloon shaped chickens.

The CCSS state that good math students look for and express regularity in repeated reasoning. Mathematically proficient students notice if calculations are repeated, and look both for general methods and for shortcuts.

NCTM Standards (general goals): Pre-K–2 Expectations
In prekindergarten through grade 2 all students should: recognize, describe, and extend patterns such as sequences of sounds and shapes or simple numeric patterns and translate from one representation to another; analyze how both repeating and growing patterns are generated.

Teacher notes: A knowledge of patterns supports the development of skip-counting and algebraic thinking. In Math Matters: Understanding the Math You Teach, Chapin and Johnson state: When students explore and generalize relationships among numbers they are developing informal understanding of one of the most important topics of high school and college algebra – functions. (Chapin, Suzanne H. and Johnson, Art. 2000. Sausalito, California: Math Solutions Publications.)
Pattern is inherent at every level of Peter Pattern: the verse itself can be examined for the pattern of the rhyme and meter; the patterns described by the verse can be explored in the physical world; the illustrations can be studied, seeking pattern ‘everywhere’, rather like a ‘hidden picture’ game. ‘Do you see it?’ ‘Can you hear it?’

Lesson Plan for multi grade levels K-2
The theme of this lesson is finding patterns and making patterns.
You will need:
As many copies of ADDverse 1 as possible to have children explore the patterns in groups, or an overhead projector to have all the children view the patterns on each page; simple small shapes cut from colored paper. (You can also use different objects such as paper clips, pennies, erasers, etc.) Two small mirrors.
New words: meter; rhyme; sequence; repeat.
Plan:
Anticipatory set: Read the poem.
Input and Modeling: If you have multiple copies of the book, group the children so that each group shares a copy or project the page on a screen. Read the first two pages again and ask each group to find a pattern in the illustration on that page. Then ask each group to find an example of that pattern in the classroom. EG, the threads of warp and woof lines of woven fabrics or rugs with the intricate pattern of over under weaving; braided hair; or braided string.
Read the next two pages. Ask questions about the pattern of the poems meter. Can they count the beats in each line on these pages? (7) Ask each group to compose a short rhythm pattern using beats and to repeat the rhythm three times. Choose one member of each group to present the rhythm they composed.
Read the verse ‘Sequenced numbers growing fast….’ What is the pattern between the numbers the clown juggles? Are there other patterns on the page? (In his clothing or in his shoes?) Which group can find the most patterns on this page? Ask the same questions for the next page with the numbers above the ducks. Is there also a pattern to the line of ducks?
Follow the same method for the ‘set of numbers shrinking’. What is the next number in the sequence above the gloves? Is there a pattern to the spacing of these numbers and the gloves? (A pair of gloves between each number.) Ask the same questions for the sequence below and those on the following page.
On the last pages, ask about the pattern of ‘the picture of Peter reading a book which has a picture of Peter reading a book which has a picture of Peter reading a book ….’ Use two mirrors to demonstrate this infinite diminishing pattern.
Guided Practice: Distribute a cup of different shapes to each group; be sure each cup contains several of each shape. Ask each group to form a repeating pattern using some of the shapes. EG, 3 circles, 2 squares, a triangle, then 3 circles…. The pattern they make must be repeated at least twice.
Checking Understanding: Next, have groups switch tables and continue the pattern begun by the group they replaced.
Independent Practice: Group the children in pairs. One child is asked to make a ‘growing’ number pattern. The second child should discover the rule and continue the pattern with the next number.